The first funeral home in Manchester and Clay County began October 18, 1938 when C. Fred and Minva Rominger arrived here from Berea. Fred was a second generation funeral director and embalmer who followed in the footsteps of his father, William Wesley Rominger. 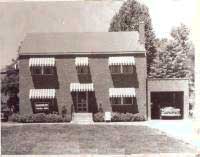 In April of 1964, Fred Brockman became an important part of the funeral home staff. Today, his son, Gary Brockman, has taken over his father’s responsibilities.

On September 25, 1970 C. Fred and Minva’s son, D. Fred graduated from Cincinnati College of Mortuary Science and became a third generation funeral director and embalmer and helped his parents with the operation of the business. His wife, Paula Crawford Rominger, is a licensed funeral director receiving her license on July 17, 1979.

The tradition of service continued when Fred and Paula’s daughter Tara graduated from Mid America College of Funeral Service August 23, 1996 and later that year became one of the few women to obtain both funeral director and embalmer licenses. Wesley, their son has completed his apprenticeship and obtained his funeral director license on June 20, 2000. Tara and Wesley are fourth generation funeral home owners in the Rominger family. We are proud that we are a family owned and operated business that has been in Clay County for over 80 years.

The Rominger Family and their efficient staff including, William Hugh Hudson, Gary Brockman and Wesley Manning (Apprentice and 5th Generation) work very hard to meet the needs of all the families we serve so we can continue the excellent service that has become a Rominger tradition.